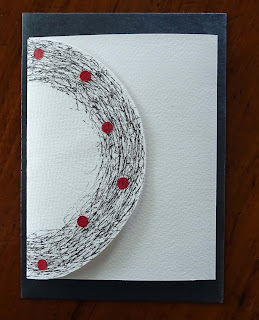 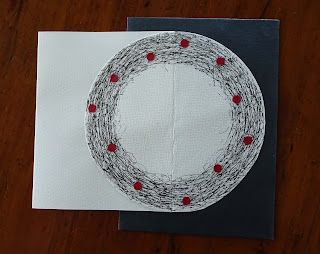 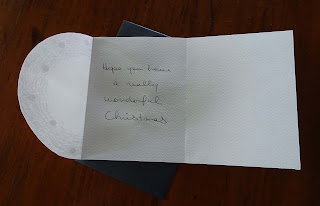 An Appraisal of 'The Future of an Illusion' 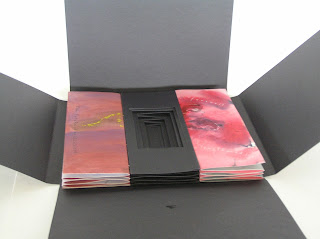 It has been very quiet here for a number of months but there have been a lot of things going on the in the background including working on a large commission, visitors from France and a son's wedding.

A very insightful appraisal of the collaborative book The Future of an Illusion by Jack Oudyn and myself  has been published on Books on Books, Curated by Robert Bolick.  I am really pleased with this appraisal as it shows the writer really understood our intentions with this piece.
Please take a look - you can find it here.

Other good news is that a copy of this book is now in the collection of the State Library of Queensland.
Posted by Helen M at 16:18 No comments:

Email ThisBlogThis!Share to TwitterShare to FacebookShare to Pinterest
Labels: Books on Books, State Library of Qld, The Future of an Illusion

Some Book Discoveries in London 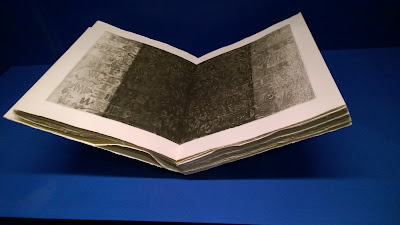 While I was in London in June I kept a look out for any artists books or related material.

One of the most enjoyable days was spent at the British Museum exhibition The American Dream pop to present which covered the unprecedented scale, ambition and experimentation with printmaking in America during the period from the early sixties onwards
and included artists like Andy Warhol, Jasper Johns, Robert Rauschenberg, Ed Ruscha, Jim Dine and many others.

I've long been a fan of Jasper Johns' work and it was great to see his
screenprinted Flags on display in this exhibition.
I was particularly thrilled to see an artists book by Johns from 1976 called Foirades/Fizzles.
Johns used five texts by Samuel Beckett in the book which also contained thirty three Intaglio prints.  The book is about translation between French and English, words and images, colour and shades of grey. There are stencilled words moving forwards and backwards across the page which are impossible to read but create a beautiful surface.
Unfortunately it was a traditional book format displayed in a glass case
so I could only see a one page spread. 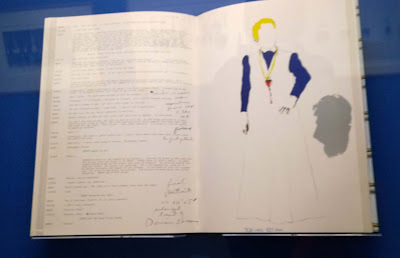 There was an illustrated book by Jim Dine from 1968 which was a script adaptation of Oscar Wilde's
The Picture of Dorian Gray and contained twelve lithographs and four loose etchings. 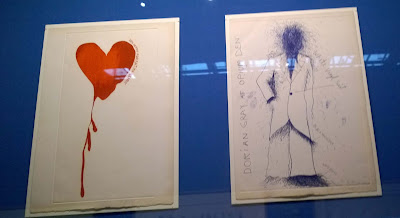 Two loose etchings by Jim Dine from the book 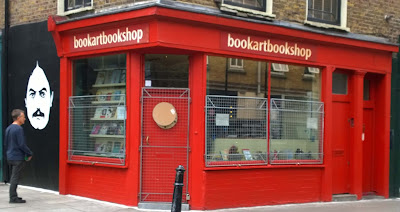 It looked really interesting with lots of Artists Books displayed in the window (behind wire security).
I saw some books there by Helen Douglas who had recently visited the State Library here in Brisbane for a lecture and workshop.  I have to say that most of the books I could see on display
were flat rather than sculptural books. 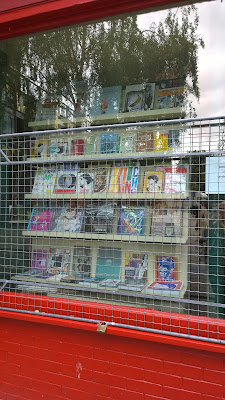 The unfortunate thing was that I discovered this shop on a Sunday when I only had a few days
left in London, and the bookshop is only open on Thursday, Friday and Saturday each week.
So I didn't get to look inside and actually handle the books which was a shame
for me and for them because I am sure I would have purchased some of them.
However they do have a website with more details here.

Visiting the bookartbookshop on one of the days they are open will be on my to-do list
next time I am in London. 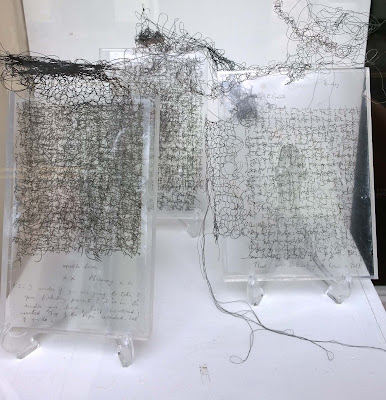 And an unexpected surprise to see this perspex artists book by Elizabeth Brickell
displayed in a gallery in the small town of Camarthen in Wales. 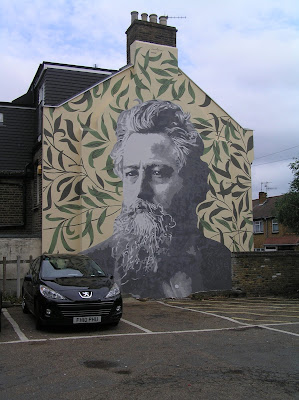 William Morris in the car park

While I was in London I went to meet an English friend who was staying
at her son's house in Walthamstow.  She suggested that the one thing I might be
interested in seeing in Walthamstow was William Morris's House and Gallery.
Although I know William Morris of Arts and Crafts fame really well, I had no idea the Gallery
was there or that it even existed and it turned out to be a lovely surprise
and a most enjoyable and informative morning. 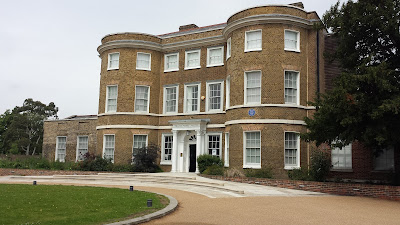 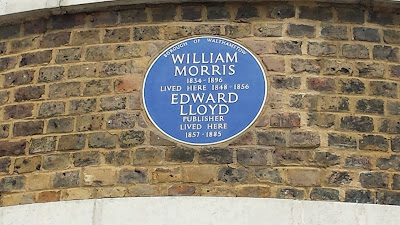 This is the only public gallery devoted to the work of William Morris.
The different eras of his life and areas he worked in were very well presented
over the two floors of the house.

There were a number of interactive displays, films, audio and activities to
participate in along the way.   I couldn't resist making a little brass rubbing of a medieval knight
and was very tempted to make a block print or some stained glass in the workshop gallery.

There was a gallery of particular interest on the first floor devoted to "The Ideal Book" .
Late in his life Morris set up a private press and became a book designer.
Many beautiful original books from the Kelmscott Press were on display,
including a copy of the Kelmscott Chaucer. 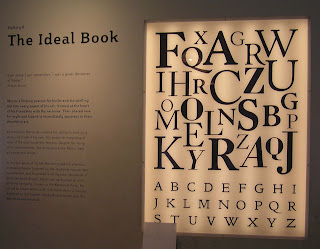 The Galleries covered all aspects of his life and besides being an active radical socialist fighting for equality, he fought for the preservation of heritage and the environment.

You can find more information about the Gallery and its displays here.

After sitting in the sun having coffee in the lovely conservatory style cafe at the back of the house there was still the garden to explore which was pretty, if a bit overgrown, and included a lovely moat and garden bridge. 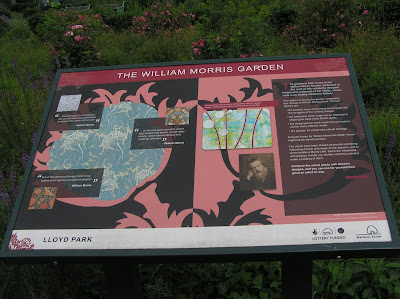 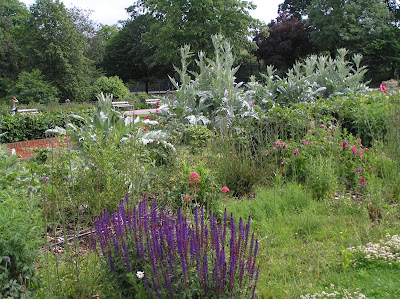 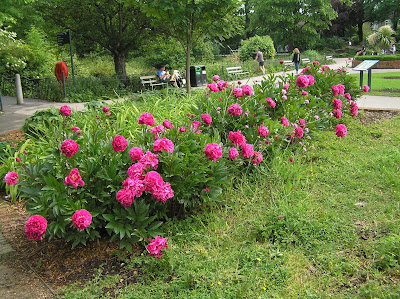 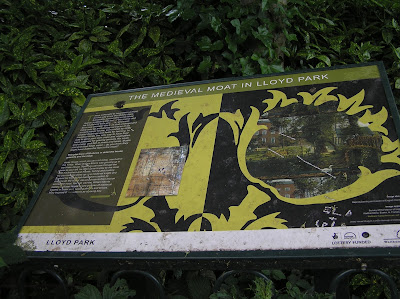 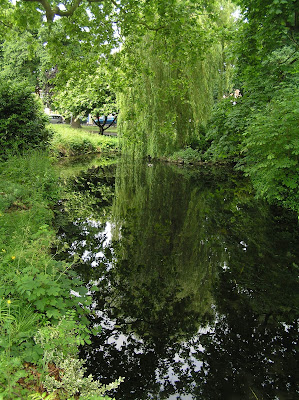 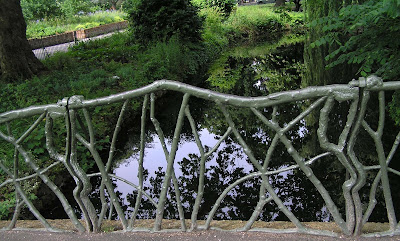 The Importance of Display of Artists Books 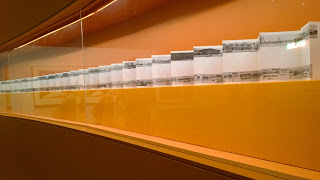 Ed Ruscha, Every Building on the Sunset Strip, displayed

I have always placed importance on the presentation and display of my Artists Books
and I think a focus on their visual aspect creates a much more rewarding experience
for the viewer and is an important part of the genre.

I was recently in London and I saw some copies of Ed Ruscha's books displayed
for sale in two different locations. 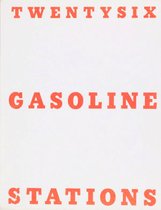 I attended The American Dream Pop to Present at the British Museum
(more on that in another post) and I was delighted to find
Ed Ruscha's Every Building on the Sunset Strip from 1966
unfolded to its full length of 7.6 metres and displayed along one long wall.

I had never seen any of his books displayed like this and it made such a difference
to get the sense of the buildings opposite each other stretched out along the strip
and walk the length along it viewing it.
Overall it looks also very much like car tracks along the paper.
It brought the book to life and made viewing it a fantastic experience.

It was great to see such a perceptive display from the Curators at the British Museum. 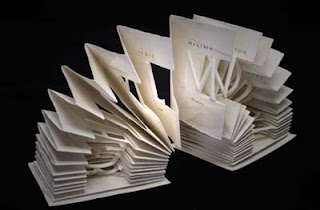 Apart from this blog, I have had a website which contains a portfolio of much of my work over the past twenty six years.
It includes examples of some of my early books, like The Roman Alphabet, 1993 pictured above.
This website will be discontinued on 3rd June 2017.

I have a new website Helen Malone Visual Artist which contains the same content but has a new look. You will find it here.
There is also a permanent link to the new website under my profile on the sidebar of this blog.

The Ruin of Ruins 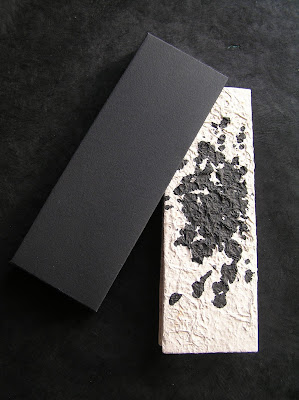 Like others I am moved by the tragedy of war, the loss of homeland and human suffering in Syria
and also by the needless and wilful destruction of culture and heritage, particularly at Palmyra,
one of the most important sites in Syria.
Destroying a people's historical and cultural sites is an attempt to erase them
from history and memory.

When I read the line in a news article -
'A Syrian fighter stood sobbing loudly in the old ruins'
I wanted to sob too and felt compelled to make this book. 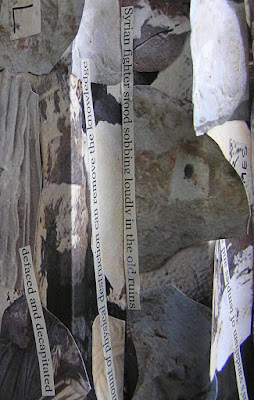 Helen M
I am an artist working predominantly with artists books, book sculptures and bookbinding in Brisbane Australia.

Some Links I use

This work is licensed under a Creative Commons Attribution-NonCommercial-NoDerivs 3.0 Unported License. All original work by Helen Malone is copyright. This license allows you to use unaltered images freely but not for financial gain as long as they are attributed to Helen Malone. Likewise any images of another artist's work on this site will always be fully attributed. Any such images will always be immediately removed if requested.

MY BOOKS APPEAR IN 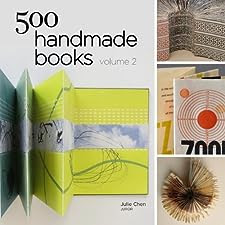 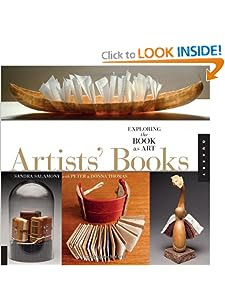 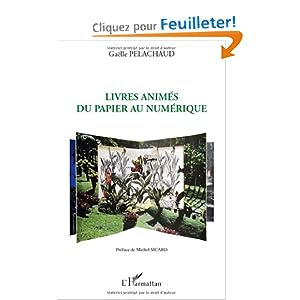